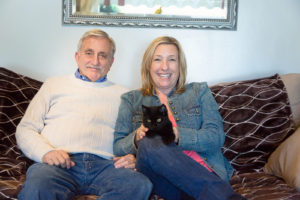 Simba was found living on the streets at three months old. He spent a few days at shelter before meeting his new parents, Tracy and Dave. As Tracy walked through the cat area of the shelter, someone (thank you Randee) opened his kennel, and he leaped onto her shoulder. He now spends as much time as possible on Tracy’s and Dave’s shoulder. He is the cat in charge in his family of three dogs and three cats. All of the animals do what he asks (humans too). He got catnapped in 2016 and spent five months away from his family, but he escaped, and because of his microchip, he made it back home to his family. Simba now spends his days basking in the sun, climbing trees and riding around on the shoulders of his humans. He has some spare time that could be used serving as county mayor. He likes to tell people what to do so why not go into politics! 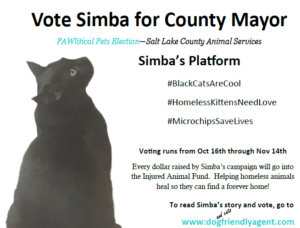 #BlackCatsAreCool
Simba spent just a few days in shelter but that is not the case with many black cats. Black cats are two-thirds less likely to get adopted than white cats and only half as likely to be adopted as tabby cats. Adopt the black cats… they are cool. 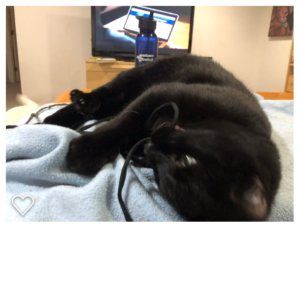 #HomelessKittensNeedLove
When Simba was found at three months, he was living on his own in the streets. That is no place for a kitten. Many kittens are born on the streets and spend the rest of their lives there.
Support your local shelters with their programs to bring these kittens into a warm, safe, loving environment. 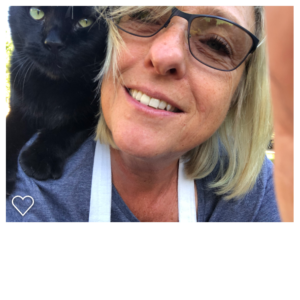 #MicrochipsSaveLives
Simba was out for a stroll one day and a neighbor decided to catnap him. The neighbor moved a few days after that and took Simba with him. Simba’s parents looked for him, put up posters, sent out postcards, and looked for him some more but Simba was gone. Five months later Simba walked up to a jogger and asked her for help. The jogger took him to shelter where BECAUSE OF HIS MICROCHIP he was reunited

How many animals am I allowed to have? (Wasatch Front)